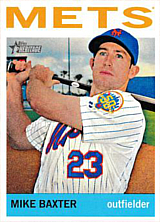 Mike Baxter was a backup outfielder for the New York Mets in 2012 when he made a catch that was the talk of all baseball. Playing left field against the St. Louis Cardinals on June 1, he crashed at full speed into the fence at Citi Field while snagging Yadier Molina's 7th-inning line drive. He dislocated the joint between his right collarbone and sternum and tore rib cartilage on his right side when his shoulder slammed into the wall, putting him on the disabled list. What made the catch even more memorable was that it preserved Johan Santana's no-hitter, the first (and to date only) thrown in the 58-year history of the Mets.

Baxter grew up in the Whitestone neighborhood of Queens as a fan of the Mets and John Olerud. He played shortstop at Archbishop Molloy High School under coach Jack Curran. He went to Columbia University at first but later transferred to Vanderbilt University. At Vandy, one of his teammates was Antoan Richardson. The San Diego Padres selected Baxter in the fourth round of the 2005 amateur draft, and he made it to the majors at last on September 6, 2010, playing for the Padres. He only went 1 for 8 in 3 games in his first taste of the majors, and on July 22, 2011, he was placed on waivers by the Friars, being picked up by the Mets. The Mets brought him back to the big leagues later that season, and he went 8 for 34 (.235) in 22 games, with his first big league homer.

Just a couple of days before his great play in Santana's no-hitter, Baxter was the subject of a column by Mike Lupica in the New York Daily News that showed the ongoing warm relationship between the player and his mentor. "He's still coaching me," Baxter said. When asked exactly how Curran is doing that, Baxter laughed and said, "He's still telling me not to take a straight ball for strike one." Baxter missed almost two months of action because of his injury, only returning on July 30. He played 89 games for the Mets that season, hitting .263 with 14 doubles, 3 homers and 17 RBI as a backup outfielder. He was the team's main pinch-hitter along with Jordany Valdespin. A patient hitter, he drew 25 walks and had a solid .365 OBP; on August 4, he drew five walks in a game against the Padres.

In 2013, Baxter drove in the winning run as a pinch-hitter twice in a three-game span. On May 7, he singled off Nate Jones of the Chicago White Sox in the 10th inning to drive in Ike Davis and give the Mets a 1-0, win, then on May 9, he singled off Jason Grilli of the Pittsburgh Pirates in the bottom of the 9th to drive in Marlon Byrd from second base, securing a 3-2 win. While he was doing well as a pinch-hitter, his production in other situations left a lot to be desired and on June 9, he was sent down to the minors, batting .212 in 47 games. The kid from Whitestone returned at the end of the 2013 season when rosters expanded, then moved on to the Los Angeles Dodgers in 2014 and the Chicago Cubs in 2015. Following a season in Triple A in the Seattle Mariners organization, he hung up his spikes. In 2018, he returned to his alma mater, Vanderbilt, as the team's hitting coach and recruiting coordinator.