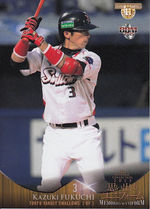 Kazuki Fukuchi did not become a regular in Nippon Pro Baseball until he was past 30 years of age.

Fukuchi continued to see increased playing time in 2003, backing up Kimura and Akihiro Higashide at second base and being used as Hiroshima's #4 outfielder. In 91 games and 159 AB, he hit .258/.285/.321 and stole 20 bases in 28 tries. He tied Takuro Ishii for 2nd in the Central League in steals, trailing only Norihiro Akahoshi.

Fukuchi hit .289/.341/.401 in 91 games for the Lions in 2006, stealing 25 bases in 34 tries. He played all 3 outfield slots and was Seibu's most-used right fielder, getting more time than Takumi Kuriyama, G.G. Sato, Hisashi Takayama and Tomoaki Sato. He was third in the Pacific League in steals behind Tsuyoshi Nishioka and Yasuyuki Kataoka.

Fukuchi batted .273/.321/.335 in 117 games for Seibu during the 2007 season. He stole 28 bases in 35 tries and was 4th in the PL in swipes behind Kataoka, Yuichi Honda and Hichori Morimoto. He was Seibu's primary leadoff hitter and center fielder. After the season, Fukuchi went to the Yakult Swallows as compensation for Seibu's signing of Yakult free agent Kazuhisa Ishii.

Fukuchi was a late addition to Japan's provisional roster for the 2009 World Baseball Classic.