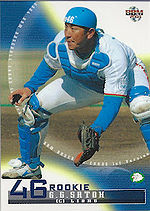 G.G. Sato is one of the few Japanese baseball players to have gotten his start in the US minor leagues. He developed into a star in 2007 and made Japan's 2008 Olympic team but faded fast afterwards.

Sato was signed by the Philadelphia Phillies out of college. He hit .261/.297/.464 in 37 games for the 2001 Batavia Muckdogs while making the transition to catcher, a position he had not played in college. Sato led the team in slugging percentage, edging out Ryan Howard.

Sato became Seibu's starting right fielder in 2007 and batted .280/.351/.510 with 31 doubles and 25 home runs in a breakthrough campaign. He tied Rick Short and Tsuyoshi Nishioka for second in the Pacific League in doubles, trailing Atsunori Inaba and tied Hiroki Kokubo for fifth in circuit clouts. His 248 total bases ranked 5th in the league and he was 10th with 69 RBI. He was hit by 16 pitches, tying Daisuke Hayakawa for second behind Greg LaRocca. Sato was 4th in the PL in slugging, trailing Tuffy Rhodes, Takeshi Yamasaki and Cabrera.

As he continued to hit in 2008, Sato was named to Japan's Olympic roster. Sato was Japan's primary left fielder in Beijing but fared poorly. He hit .200/.304/.450 with 7 strikeouts in 20 AB. Worse, he fielded .717 with all of his errors coming in the Medal round. In the semifinals, he made two errors against South Korea to lead to 3 runs in a 6-2 loss. He dropped a Brian Barden fly in the Bronze Medal game that started the US comeback from a 4-1 deficit for a 8-4 win. In part due to Sato's poor defense and hitting, Japan went home without a Medal.

Sato hit .302/.368/.546 for Seibu in 2008 with 30 doubles and 21 home runs. He was 7th in the Pacific League in average, 10th in doubles, tied Hiroyuki Nakajima for 8th in homers, was 9th in OBP and finished 4th in slugging behind Cabrera, Tuffy Rhodes and Takeya Nakamura. His performance helped Seibu won the PL pennant. Due to injuries, he missed the postseason.

For 2012, he signed with Bologna in the Italian Baseball League. He hit cleanup and played left field on Opening Day, going 2 for 5 in a win against Parma.