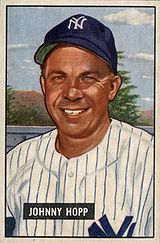 Johnny Hopp had a 14-year career in the big leagues, including some excellent seasons with the bat. He appeared in five World Series, winning two of them with the St. Louis Cardinals and two with the New York Yankees.

Hopp played outfield and first base. As an outfielder he was mostly a center fielder, although some years he played more in left or in right.

He was usually among the league leaders in stolen bases, although he never led the league.

Hopp was signed in 1936, and came up for a cup of coffee with the Cardinals in 1939, hitting .500. By 1941 he was a regular outfielder alongside Enos Slaughter and Terry Moore in the Cardinals' outfield, hitting .303 with 11 triples. That year was also the year that a young kid named Stan Musial broke in, and in 1942 Hopp was moved to first base while Musial played the third outfield spot. The Cardinals won the 1942 World Series with that alignment.

Hopp's and Musial's emergence made Johnny Mize expendable, and Mize was traded after the 1941 season. Hopp and Mize would be reunited in 1950 on the Yankees.

Hopp had a good year with the bat in 1944, hitting .336 and finishing fourth in the National League in batting. The Cards won the World Series that year as well. After the 1945 season he was traded to the Boston Braves for Eddie Joost and cash, and responded by hitting .332 in 1946, good for second in the league.

Late in his career, Hopp came to the New York Yankees, primarily to pinch-hit, and played in the 1950 World Series and 1951 World Series.

The most similar player to Hopp (through 2006, using the similarity scores method) is Billy Southworth, who was Hopp's manager in 1946 when he was second in the league in batting.

After his playing career ended, Hopp was a Detroit Tigers coach in 1954 and a member of the St. Louis Cardinals staff in 1956. He was the manager of the Class C Grand Forks Chiefs in the Northern League for the first part of the 1955 season. The team got off to a 17-40 record and he was replaced by Joe McDermott. The change in managers did little good as the team finished with a 39-85 record and McDermott was himself replaced later in the season.