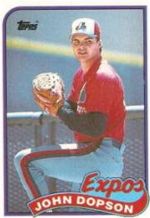 He went to Delone Catholic High School in McSherrystown, Pennsylvania after he was cut from the junior varsity baseball team at Westminster High School near Finksburg, MD. John's brother Matt was pursued by the Chicago White Sox, but he chose not to play professional baseball. Both attended and pitched for Delone. John was also a basketball star there. In his senior season, he pitched two no-hitters. In the 1982 amateur draft, he was selected in the second round by the Montreal Expos. The signing scout was Herb Newberry.

Dopson always had good control and it showed in his first pro season with the Jamestown Expos, in the New York-Penn League. He was the youngest pitcher on the staff but led the team with 15 starts, going 6-8 with a 3.97 ERA and allowing 34 walks in 106 2/3 innings.

All things appeared fine for Dopson but he missed the first few weeks of training camp in 1985 due to a virus. He began the season with Jacksonville but after 5 starts when he as 3-0 with a 1.11 ERA, he was brought up to the Indianapolis Indians, in the American Association. Dopson had to miss time a couple of stints during the season due to tendinitis. But he finished the season strong, with 2 consecutive complete game shutouts in late August, which earned him Pitcher of the Week honors. He was called up to Montreal in September and made 3 starts and one relief appearance. His best outing was his second game against the Philadelphia Phillies, when he went 7 innings, allowing only 2 runs. He didn’t figure in the decision. He was hit hard in his other 3 games. Overall, his record was 0-2 with a 11.08 ERA.

As was the case in 1985, Dopson wasn't able to begin Spring training in time in 1986, this time due to shoulder problems. He began the season on the disabled list. He made his first appearance of the year in May, with West Palm Beach on a rehab assignment. After 2 games when he went 2-0 and didn’t allow a run in 10 innings, he was back with Indianapolis. But he made only one start before going to the DL again. He was back in late June but made only 3 more starts before being shut down for the rest of the season and underwent arthroscopic surgery. He was removed from the 40-man roster after the season.

In 1987, Dopson was with Jacksonville and made 21 starts, going 7-5 with a 3.80 ERA. His record was misleading as he won 6 of his last 7 decisions after a rough start. The Expos decided to place him back into the 40-man roster that winter.

He began the 1988 season with Indianapolis but after 3 starts, was promoted to the big league club, where he remained for the rest of the season as a starting pitcher. His first major league win came when he shut out Orel Hershiser and the Los Angeles Dodgers, pitching 6 innings during which he gave up only 3 hits. He was as good as could be expected with a 3.04 ERA in 26 starts and 58 walks allowed. But it didn’t translate into wins as the team provided him with very little run support. In his 25 starts, only twice did he allow more than 3 earned runs. 18 times, the Expos scored 3 runs or less when he was on the mound. That left him with a record of 3-11. He had quality start in 7 of his 11 losses. It was Dopson's last season with the Expos organization. The Expos thought he was expendable, especially with youngsters Brian Holman, Randy Johnson and Mark Gardner in the organization. In December, he was traded to the Boston Red Sox with Luis Rivera for shortstop Spike Owen and pitcher Dan Gakeler.

Dopson was in Boston's starting rotation all season long in 1989. He was 12-8, establishing a career high in wins, with a 3.99 ERA in 28 starts (he had one relief outing early in the season). On the flip side, he also accumulated 15 balks that season, most of them coming in three games. On May 2nd, he was charged with three balks. In his next start, on May 7th, he committed four balks. On June 2nd, he balked a Major League record five times. He missed much of August due to an elbow ailment. He didn’t allow a run in his first 2 start in 1990 but pitched only 1 1/3 inning in his third one, leaving with a stiff right elbow. He was placed on the disabled list and made only one more appearance in June and eventually underwent Tommy John surgery.

Dopson didn’t pitch again until August 1991 when he joined the Red Sox affiliate in Winter Haven (Florida State League) on a rehab assignment. He re-joined the Red Sox in September when he made one relief outing.

He began 1992 with the Pawtucket Red Sox, in the International League, but was called up in May and joined the starting rotation. He did well in the first half of the season and in mid-July, he was 6-5 with a 3.39 ERA after 11 starts. He won only one more game the rest of the season though, finishing at 7-11 with a 4.08 ERA in 25 starts.

Dopson had to settle on a minor league contract with the California Angels in February, reuniting him with his manager with the Expos, Buck Rodgers. He had a strong training camp and earned a spot on the starting rotation at the beginning of 1994. He made a very good first impression, throwing seven scoreless innings in his first start of the season against the Minnesota Twins in what was his last victory in the big leagues. He made 4 more starts before being demoted to the bullpen. From then on, he was used in mop-up situations. In June, he was put on the disabled list due to a sore shoulder. He didn't pitch again that season and was released in October.

In April 1995, he was at the training camp organized by the union for players with no contract after the end of the players' strike.

After his playing days, he remained involved in coaching.