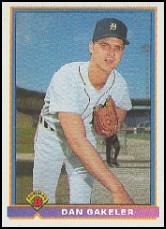 Dan Gakeler was used in relief and as a starter during his one season in the major leagues. With the Detroit Tigers of 1991, who went 84-78, Gakeler started 7 games and relieved in 24 after making his debut on June 9th.

Gakeler was drafted in the secondary phase of the January 1984 amateur draft by the Boston Red Sox. He played for the Greensboro Hornets in 1985 and 1986. He was a Double A All-Star in 1988 and was traded to the Montreal Expos after the 1988 season, as part of the deal that sent SS Spike Owen to Montreal in return for P John Dopson and SS Luis Rivera. He was with the Indianapolis Indians in 1989. Granted free agency after the 1990 season, he was signed by the Tigers.

In all, Gakeler pitched for 12 seasons, and then was a minor league pitching coach for four seasons, including the Lowell Spinners in 1996, Michigan Battle Cats in 1997, and Savannah Sand Gnats in 1998.