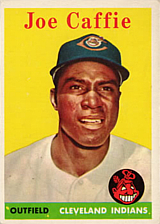 "I have seen a lot of fast ones, but Caffie is the fastest, and that includes guys like Sam Jethroe." - Luke Easter, quoted in Crossing the Line: Black Major Leaguers 1947-59

Outfielder Joe Caffie had a lifetime major league batting average of .291. He broke in with the Cleveland Indians in 1956 and hit .342 in 38 at-bats (with a .432 on-base percentage). The next year, he dropped to a still decent .270 average in 89 at-bats, yet 44 games in two seasons was the sum total of his major league career.

The players with the most similar last names are Ivanon Coffie and Ben Caffyn.

Was Caffie a victim of racism? Possibly. His credentials in the minors certainly seemed to justify a spot in the majors. However, the 1957 Indians had an unusually good outfield, with veteran Gene Woodling hitting .321 and slugging .521 and youngsters Roger Maris and Rocky Colavito, both of whom went on to tremendous careers. Backup outfielders on the team included Dick Williams, who went on to become a Hall of Fame manager. Caffie's range and fielding percentage in the outfield were certainly decent, and with his hitting one would have thought that another team would have wanted to pick him up. It did not happen. And so, he spent most of his career (1951-1961) as a minor league star.