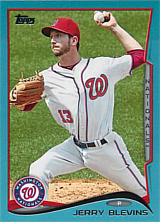 Jerry Blevins was selected by the Chicago Cubs in the 17th round of the 2004 amateur draft. He was signed by scout Brian Williams and made his pro debut that summer. He eventually was traded to the Oakland Athletics with Rob Bowen for Jason Kendall on July 16, 2007, making his major league debut with the A's in September.

Exclusively used as a relief pitcher in the majors, almost always as a LOOGY, his career high is 75 appearances in 2017. He pitched 63 games in 2010, the year he earned his first major league save, and again in 2012, when he was 5-1 and pitched in the postseason for the first time. He made three appearances in the 2012 ALDS against the Detroit Tigers, giving up one hit and nothing else in 3 2/3 innings. He has struck out almost a batter per inning during his big league career, in spite of shuffling continuously between the majors and AAA since his debut.

On April 29, 2013, he was the winning pitcher in the longest game (by time) in Oakland history, against the Los Angeles Angels of Anaheim. Blevins came in with one out in the 18th inning, taking over for Brett Anderson who had gamely pitched 5 1/3 innings of relief but had to leave because of a foot injury. Anderson's name had been inserted in the batting order a couple of innings earlier, when another A's player, outfielder Chris Young, had to leave because of an injury and the only available replacement was designated hitter Seth Smith. Thus, after completing the top of the 18th without any runs scoring, Blevins had his first major league plate appearance - and only the second of his professional career - in the bottom of the 18th; he quickly struck out against Barry Enright. But he pitched a scoreless 19th inning and, when Brandon Moss hit a two-run, walk-off home run off Enright in the bottom of the frame, Blevins earned his first victory of the season in a game that had taken 6 hours and 32 minutes to complete, getting credit for the 10-8 win. He went 5-0, 3.15 in 67 appearances that season, pitching 60 innings during which he struck out 52 batters. On December 11th, the A's traded him to the Washington Nationals for minor league outfielder Billy Burns.

He pitched 64 games for the Nationals in 2014, going 2-3 with a 4.87 ERA. He was unable to make the team's pitching staff out of spring training in 2015, but rather than cutting him, the Nats decided on March 30th to trade him to the New York Mets in return for outfielder Matt den Dekker. He had not given up a run in his first seven appearances for the Mets in 2015 when, on April 19th, he suffered a broken forearm, the result of being hit by a comebacker off the bat of Dee Gordon of the Miami Marlins. While rehabbing, he broke the arm again in a freak accident on August 3rd, when he slipped and fell walking off a curb. This erased any chance that he would be back. When he came back in 2016, he had some of his best seasons, pitching 75, 73 and 64 games over the next three years. He was 4-2 with 2 saves and a 2.79 ERA the first season and 6-0, 2.94 with a save in 2017. His final appearance that season was the 500th of his major league career. In 2018, he made his first career start, on June 24th, against the Los Angeles Dodgers as part of a bullpen day in which seven pitchers were used by the Mets. He gave up 2 runs in 2 innings, on his way to going 3-2, 4.85 in 64 games with a save, pitching 42 2/3 innings. Before the 2019 season, he signed a minor league deal with the Oakland Athletics, but despite the A's not having a left-hander in their bullpen, he started the year in AAA with the Las Vegas Aviators. He had a 1.67 ERA in 7 games, then on April 28th his contract was sold to the Atlanta Braves for a reported sum of $1. He made his first appearance out of the Braves' bullpen that same day, pitching a third of an inning. In two Bravos stints, he finished 1-0, 3.90 with a save in 45 games (32 1/3 innings) and was unused in the postseason.

In international play, Blevins pitched for Team USA in the 2007 Baseball World Cup, a couple of months after his major league debut. He was 1-0 and allowed one hit and two runs in three innings in the Cup while striking out four to help the Americans win their first Baseball World Cup Gold Medal in over 30 years. He gave up two unearned runs in the US's lone loss, to the Italian national team, with his error playing a key role. I n the Gold Medal game, he retired the only two batters he faced from the Cuban national team before giving way to closer Jeff Stevens for the save.