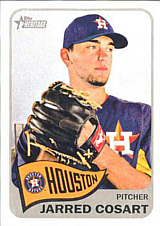 Once a 38th round draft pick out of high school, Jarred Cosart shot up prospect leaderboards within two years. Yet he never harnessed his skill into big league success, though many teams gave him the opportunity to shine. He threw his final big league pitch at 27.

Cosart was picked by the Philadelphia Phillies and Steve Cohen late in the 2008 amateur draft. He made his pro debut with the 2009 GCL Phillies, going 2-2 with a 2.22 ERA, 25 whiffs in 24 1/3 innings and a .143 opponent average. Moving up to the Lakewood Blue Claws in 2010, he began 7-2 with a 3.44 ERA, 77 strikeouts and 15 walks in 70 2/3 innings. He was picked for the US roster in the 2010 Futures Game but an injury led to his missing the game. In 2011, he went 9-8, 3.92, in 20 games with the Clearwater Phillies. He was named once again to the US team for the 2011 Futures Game, and this time, not only did he get to play, he earned the win by pitching a scoreless 8th inning against the World team. On July 29th, he was one of four young players sent to the Houston Astros in return for All-Star outfielder Hunter Pence. Jonathan Singleton and Josh Zeid were the two other prospects in the trade and Domingo Santana was added in August to complete the trade.

Cosart had a tremendous major league debut for the Astros on July 12, 2013. Facing defending Cy Young winner David Price of the Tampa Bay Rays, he took a no-hitter into the 7th inning before giving up a one-out single to Ben Zobrist. He gave up another hit in the 8th, then was lifted for Jose Veras after walking pinch-hitter Kelly Johnson to lead off the 9th. Johnson was erased on a double play, but Veras gave up an unearned run. The Astros had scored a pair of runs in the first before being shut down the rest of the way and held on for a 2-1 win, Cosart's first. His next start came for the Pacific Coast League in the 2013 AAA All-Star Game on July 17th, but he gave up four runs in 1 2/3 innings, including a three-run homer to Tony Sanchez, to be charged with the 4-3 loss. He made 9 more starts for Houston during the second half of the season, with a record of 1-1 and 1.95 ERA in 60 innings. He was a victim of a lack of run support, the offense scoring 3 runs or less in 6 of the 10 games he started, while he gave up 3 runs or less in 9 of his 10 starts, and only 4 runs in the other.

Following his strong performance as a rookie, the Astros named Cosart their number two starter heading into the 2014 season. In his first start against the New York Yankees on April 2nd, he pitched quite well, giving up no runs in 5 innings to be credited with his team's 3-1 win. He justified his position by going 9-7, 4.41 in 20 starts for Houston. On July 31, he was traded to the Miami Marlins, who were in the unlikely position of contention in the NL East and needed another starter. In the second major trade of his career, he was accompanied by utility man Enrique Hernandez and minor leaguer Austin Wates while the Astros continued to add prospects, with Jake Marisnick, Colin Moran and Francis Martes headed to the Lone Star State. Jarred pitched very well for the Marlins, going 4-4, 2.39 in 10 starts, even if the team did not make a real run at the postseason.

In spring training 2015, Cosart ran afoul of baseball's strict laws against gambling. Major League Baseball announced in a statement that it was investigating the issue and that ,in the interim, Cosart's Twitter account, where the alleged problematic acts had taken place, was being deleted. While details were sparse, Cosart hinted that unknown persons had taken advantage of his account to circulate betting-related information and that he was caught off guard; he added that he was cooperating fully with the investigation. The season was not so good; he missed a month due to vertigo and ended up back in Triple A. In 14 games, he finished 2-5, 4.52. He was rocked in four starts in 2016, moving as part of another big trade to the San Diego Padres, alongside Carter Capps, Josh Naylor and Luis Castillo, for Andrew Cashner, Tayron Guerrero and Colin Rea. Despite moving to Petco Park, he continued to struggle, with an 0-3, 6.03 line. In fact, he would never win another big league games, making seven final appearances for the Friars in 2017.

Jarred's brother, Jake, was a third-round pick in the 2014 amateur draft. His grandfather, Ed Donnelly, also pitched in the majors.