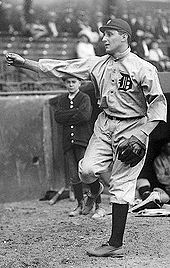 Hooks Dauss was born on September 22, 1889, in Indianapolis, Indiana as George August Daus. He is the winningest pitcher in the history of the Detroit Tigers, with 223 wins, although in his day he was overshadowed by teammates Ty Cobb, Sam Crawford and Harry Heilmann.

He was not a big man, being described as "average height" and weighted 168 lbs. His fastball was only average, but he had an excellent curveball or hook, hence his nickname. He was a workhorse, pitching 245 complete games, and lining up 11 consecutive seasons of 200 or more innings pitched. In spite of that yeoman's work as a starter, he was used regularly in relief throughout his career, ending up with 150 relief appearances, 121 as his team's final pitcher.

He landed his first professional baseball job at age 19 after pitching for his high school team. He was hired by the South Bend Greens of the Central League in 1909, was promptly cut when manager Angus Grant found him too small; he still convinced Grant to let him pitch an exhibition game against the Duluth White Sox of the Minnesota-Wisconsin League, which he won by shutout, prompting Duluth to sign him. He went 19-10 in 37 games, taking the team to the championship game, then was sold to the St. Paul Apostles of the American Association after the season. St. Paul returned him to Duluth in 1910, then he pitched for the Winona Pirates of the same league in 1911. The Pittsburgh Pirates bought his contract, but sent him back to St. Paul, where he went 12-19 in 1912. Seemingly stuck in Minnesota for good, his chance came when he was spotted by former major league catcher Deacon McGuire, who was a scout for the Tigers, who bought his contract at the end of 1912.

Dauss made his Major League debut with the Tigers on September 28. He started two games that season and impressed both manager Hughie Jennings and catcher Oscar Stanage, earning him a spot in the team's starting rotation for 1913. He won 13 games with a 2.48 ERA as a rookie, then in 1914, he had a record of 19-15, with 22 complete games, three of which were shutouts. He pitched 302 innings in that season, gave up just 87 walks and struck out 150 batters. His ERA for the year was 2.86. He also hit 18 batters, a career-high, but he would regularly post high totals of hit batsmen, finishing his career with 121, one of the top 30 totals of all time.

By 1915, he was a 20-game winner, finishing at 24-13. In that season, he also had a low 2.50 ERA. He pitched 309 innings, and completed 27 games. The Tigers were very competitive that season, winning 100 games and finishing in second place in the American League 2½ games back of Boston. That would be a high-water mark during Dauss's stay in Detroit, as the solid pitching threesome he formed alongside Jean Dubuc and Harry Coveleski would only perform at top regime for a short period. He married Ollie Speake of St. Louis, MO in mid-season, on the same day that he would pitch a 7-1 victory over the St. Louis Browns. The Tigers would end up short of the Red Sox by 4 games in 1916, when he won 19 games, but would fall progressively further from the pennant after that.

Over the years, he continuously reached more than 10 wins, and most of the time more than 15. In 1919, he had his second 20-win season, finishing the year with a 21-9 record. 1923 marked his third twenty-win season, when he finished up at 21-13. He had a career high in innings pitched that year, when he pitched 316 innings. His ERAs rose with the end of the Deadball Era and the beginning of the 1920s, but he still remained a very effective pitcher for a few years before age caught up with him. What also did not help was that Ty Cobb replaced Jennings as manager in 1921 and had a peculiar way of handling pitchers. He would ride the hot hand, resulting in Dauss getting into 50 games and pitching a career-high in innings in 1923, then shuffled him between the bullpen and spot starts all year in 1924 and then used him again as a starter in 1925.

All that jerking around put great stress on Dauss's arm, and he was not quite right when he pitched his final season (1926) mainly in relief, as only five of the 35 games he pitched in were games started. He reached a career high in saves that year, with 9, in addition to 11 relief wins. He also suffered from an irregular heartbeat and decided to retire at the end of the year.

He finished up with 223 career wins, and just 182 losses. He had 245 complete games, and 22 of those were shutouts. He also tacked on 39 saves. His career ERA was 3.30. He is the Detroit all-time leader in both wins and losses, is second in innings pitched, just 3 behind George Mullin. His 538 games pitched also place him second, behind John Hiller, who pitched 7 more games while being a full-time reliever for almost his entire career.

Dauss moved to his wife's hometown of St. Louis after retirement, where he owned a large farm and worked for the Pinkerton Detective Agency. He died on July 27, 1963, of a heart ailment, survived by his wife. He was 74 years old.