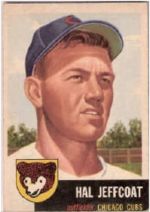 Hal Jeffcoat played 12 seasons in the major leagues, split roughly 50/50 between playing outfield and being a pitcher. His older brother George Jeffcoat had previously been a major league pitcher.

Although he had some speed and hit .273 in 1951, mostly he had low batting averages and was gradually relegated to backup status. He had a strong arm in the outfield, however, and tried pitching.

Whereas he had been prone to strike out as a rookie outfielder, being 5th in the National League with 68 strikeouts as a batter, by the mid-1950s he was striking out other people, and had a high of 63 strikeouts as a pitcher in 1957.

Virtually all his career was spent with the Chicago Cubs and Cincinnati Redlegs; he finished his career with 11 games for the St. Louis Cardinals in 1959. As a rookie outfielder with the Cubs, his fellow outfielders were Bill Nicholson and Peanuts Lowrey. When he converted to pitching in 1954, the Cubs' catcher was Joe Garagiola, and it was the first full season of Cubs shortstop Ernie Banks. He was with the Redlegs, going 8-2, when Frank Robinson was a 20-year-old rookie hitting 38 home runs in 1956.

He is the younger brother of George Jeffcoat. His brothers William and Charles were minor league pitchers, and his son Harold Jeffcoat pitched in the minors.