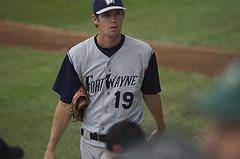 Undrafted out of Duke University, pitcher Greg Burke spent 2005 playing for the Atlantic City Surf of the independent Atlantic League. He was signed by the San Diego Padres organization prior to the 2006 season and began the year with the Lake Elsinore Storm, for whom he earned wins in his first two appearances. He joined the Fort Wayne Wizards in May and became a part of the club's rotation in June, posting a 6-5 record with a 3.58 ERA overall for the club. After returning to Lake Elsinore in 2007, he became the closer for the AA San Antonio Missions in 2008, recording 23 saves for the team.

Burke started 2009 with the Portland Sea Dogs, going 3-0 with a 2.25 ERA and 7 saves in 13 outings for the club. In May he was called up to the majors by the Padres, and he remained with San Diego for the remainder of the year. In 48 appearances, he was 3-3 with a 4.14 ERA and 33 strikeouts. However, he was released by the Padres prior to the 2010 campaign then did not return to the big leagues until 2013, when he pitched 32 games for the New York Mets.