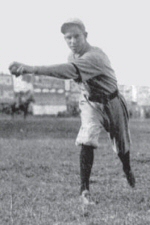 "Palmero is . . . an idol in Havana, so much so . . . that the city had decided to take a holiday on the day that Palmero sails from Havana for New Orleans . . . No pitcher (other than Palmero) . . .since Joe McGinnity . . . has been able to start the ball low and have it break up around the batsman's shoulder." - from the New York Times of December 23, 1913

Emilio Palmero, born in Cuba, pitched five seasons in the majors and 17 in the minors, along with his many years playing in Cuba. He won 177 games in the minors. He also managed in 1937.

At times Palmero was not permitted by his major league team to play in Cuba, so he used the name E. Mendez.

One writer says that in 1920 a team composed of New York Giants visited Cuba in the fall, and Babe Ruth, who was given high pay, was added to the team. Palmero was chosen by the Almendares team to pitch against Ruth and did quite well against him. The Giants also had Dave Bancroft, George Kelly, and Ross Youngs, among others. Palmero himself had played for the Giants several years earlier.

Palmero is one of four players (through 2008) born in Guanabacoa. He has the most major league appearances of the four.

His name is spelled P-A-L-M-E-R-O, unlike that of Rafael Palmeiro.