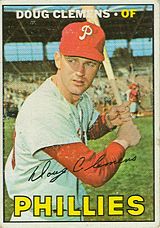 After attending Syracuse University, Clemens was signed by the St. Louis Cardinals and made his pro debut with the Billings Mustangs in 1960, hitting .389 in 39 games. Late that season, he earned a brief call-up to the majors, appearing in the Cards final game of the year but not getting an at-bat. Spending most of 1961 in the minors, he saw his first significant major league playing time in 1962 while Minnie Minoso was injured. He hit his first big league home run on June 30th, off Vern Law of the Pittsburgh Pirates, and ended the year with a .237 average in 48 games.

Clemens saw action in only 5 games with St. Louis in 1963 but was on the team's Opening Day roster in 1964. After hitting .205 in 33 games for the Cardinals, he was dealt to the Chicago Cubs on June 15th as part of the trade that brought future Hall of Famer Lou Brock to St. Louis. Seeing most of his action in right after the trade, he hit .279 in 54 games with the Cubs. He saw the most big league action of his career in 1965, hitting .221 with 4 homers in 128 games as Chicago's fourth outfielder.

Prior to the 1966 season, Clemens was traded to the Philadelphia Phillies for Wes Covington. He spent three years with the team, seeing less action in each successive season with the club.