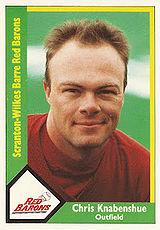 Outfielder Chris Knabenshue played six seasons in AAA yet never made the majors.

Knabenshue hit .279 with 45 walks and 15 home runs for the 1988-1989 Águilas de Mexicali and was among the Mexican Pacific League leaders in walks and dingers. reached AAA with the 1989 Las Vegas Stars. The 25-year-old put up a .258/.418/.516 line with 83 walks and 18 home runs. His steal total dropped from 16 to 0 (getting caught all 3 tries). He led the 1989 Pacific Coast League in OBP, two points ahead of Bruce Fields. He was also 4th in OPS, between Jeff Manto and Jerald Clark, and third in walks (behind Doug Jennings and Manto). Everyone else in the top 20 in walks or top 10 in OPS would play in the majors some day. Knabenshue was left off the PCL All-Star team as Fields, Clark and Huff won the three outfield slots.

Moving to the Philadelphia Phillies system, Chris spent 1990 with the Scranton/Wilkes-Barre Red Barons. He hit 18 home runs with 76 walks but his batting line fell to .237/.365/.429. He was still 4th in the 1990 International League in walks, behind Jim Walewander, Leo Gomez and Jeff Gardner. He also tied Chris Hoiles for 7th in the IL in circuit clouts and led IL flyhawks with a .991 fielding percentage.

Knabenshue later became a scout for the Atlanta Braves. He signed Matt Young.