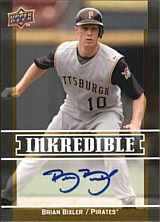 Shortstop Brian Bixler hit .322/.389/.584 in his freshman year at Eastern Michigan. He was named the Mid-American Conference Freshman of the Year. In 2003, the sophomore batted .322/.430/.491. In 2004, Bixler established himself as a prospect. He set MAC records for longest hitting streak (34 games) and hits (110), set school records in steals (31 in 38 tries) and runs scored (74) and hit .459/.519/.650. He was third in NCAA Division I in average, second in hits and third in OBP. He became the Eastern Michigan all-time leader in runs scored (194) and was named MAC Player of the Year. Baseball America named him third-team All-American at shortstop behind Dustin Pedroia and Stephen Drew. The Pittsburgh Pirates drafted him in the 2nd round of the 2003 amateur draft and he was signed by scout Duane Gustavson for a $670,000 bonus.

Bixler made the International League All-Star team at shortstop in 2007 after hitting .274/.368/.396 for the Indianapolis Indians. He scored 77 runs, stole 28 bases in 32 tries and legged out 10 triples. He tied Alberto Gonzalez for the league lead in three-baggers and tied former fellow Pirate shortstop prospect Brent Lillibridge for 4th in steals. Bixler was surprisingly not added to the 2007 Pirates roster as a September call-up; one likely cause was that Jack Wilson hit around .400 the final two months of the year and was too hot to be rested. Bixler joined Team USA but was their worst performer in the 2007 Baseball World Cup. He batted .160/.300/.200 and was caught stealing in his lone attempt. He had almost as many errors (3) as hits (4) and his poor defense led to several unearned runs in their shocking loss to the Italian national team. The US still recovered to win its first Gold in over 30 years.

Bixler was added to Pittsburgh's 40-man roster in late November 2007, replacing Josh Phelps. When Jack Wilson and Freddy Sanchez were injured early in 2008, Bixler was called up to provide middle infield depth. He debuted as a pinch-hitter for John Grabow and struck out against Logan Kensing. In Bixler's second game, he was booed by a home opener crowd of over 37,000 when he failed to break for a home during a surprise bunt by Jose Bautista. Bixler had entered as a pinch-runner for Ryan Doumit; Pittsburgh went on to lose in extra innings. Bixler spent almost two months in Pittsburgh, hitting .175/.241/.200 in 34 games and fielded .955 at shortstop. When Wilson came off the disabled list, Bixler was returned to Indianapolis. He finished the year with a batting line of .157/.229/.194 in 50 games for the Pirates with 36 strikeouts in 108 at bats and a .280/.346/.402 line with 23 steals in 30 tries in 86 games for the Indianapolis Indians.