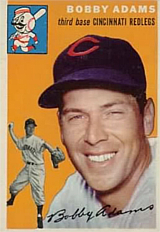 Bobby Adams played in 1,281 major league games for the Cincinnati Reds, Chicago White Sox, Baltimore Orioles and Chicago Cubs in 14 seasons. Used mostly as a utility player, his best seasons as a big leaguer were in 1952 and 1953 when he was a regular in Cincinnati. He was the brother of Dick Adams and father of outfielder Mike Adams.

Adams was signed by the Reds assigned to their Ogden affiliate in the Class C Pioneer League with his brother Dick in 1939. He played for Ogden in 1939 and 1940 and for the Columbia Reds in the Class B South Atlantic League in 1941. In 1942, he played for the Syracuse Chiefs in the Class AA International League. At the end of that season, he went into the service and was stationed with his brother at the Santa Ana Army Air Force Base. Adams played baseball there until 1944, when he was sent to the Pacific theater. He was discharged in November 1945. In 1946, he reported to the Reds and stayed with them until the 1955 season when he was purchased by the White Sox. He was traded to Baltimore for the 1956 season and finished his career with three seasons on the North side of Chicago. He primarily wore number 12.

After his playing career ended, Adams served as a Chicago Cubs coach from 1961 to 1965 and again in 1973, while president of the Tacoma Cubs of the Pacific Coast League. In 1961, Adams split his time as manager of the Wenatchee Chiefs (Northwest League) and San Antonio Missions (Texas League), in addition to coaching in the majors as part of the College of Coaches experiment, which entailed rotating their managers and coaches not only at the major league level, but also among their minor league affiliates. In 1962, he was the manager of the Cubs' affiliate franchise in the Arizona Instructional League.