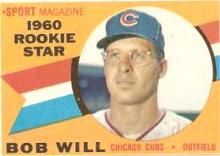 Seventeen-year-old Bob Will was the Chicago representative in the annual Hearst High School All-Star Classic at the Polo Grounds in 1949. He was awarded the game's Most Valuable Player Trophy by the widow of Lou Gehrig after picking up a pair of hits and three RBIs for the United States team against the New York City stars. After playing for Hall of Famer Fred Lindstrom at Northwestern University, Will signed a free agent contract with the Chicago Cubs on May 16, 1954 and worked his way up.

A left-hander all the way, Bob started his pro career with the Magic Valley Cowboys of the class C Pioneer League, hitting at a .359 clip in 96 games with eight home runs. The hard-hitting outfielder had six straight years in the minors (1954-1959) and never hit under .304. He was up with the Cubs for 70 games in 1957, hitting only .223 and again for six games in 1958 and was sent to the Fort Worth Cats of the Texas League where he finished out the season with a .313 average.

Will was named the league's Most Valuable Player after hitting .336 and leading the American Association in hits with 203 and runs with 101, along with 11 homers, and also making the All-Star team for Fort Worth in 1959. He got another shot at major league pitchers in 1960 when he hit .255 for the Cubs playing full time in the outfield. He hit .257 in 1961. Bob led the National League in pinch hitting appearances with 52 in 1961 and had 17 base hits off the bench in 1962. That year, he tailed off to .239 in 87 games and finished out his major league career with a .174 average in 1963. He signed out of the big leagues with a career .247 average over six years.

Will gave the minor leagues one more shot in 1964 at age 32. He played in 90 games with the AAA Jacksonville Suns and appeared in 36 with the AAA Salt Lake City Bees; he hit for a combined average of .334 and six homers. He bowed out of pro baseball after that season, ending his minor league run with a .333 average over eight seasons.

After baseball Will became a bank vice-president in Chicago, IL. He retired in Naples, FL but died in the Chicago area in 2011.