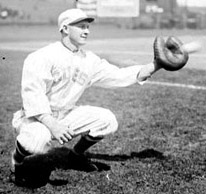 Bob O'Farrell is quite possibly the only 21-season veteran with an MVP award who is not in the Hall of Fame. However, he never had 500 at-bats in a season and only twice had 400+ at-bats in one season, and overall, his numbers were rather unspectacular.

A catcher known for his strong arm, O'Farrell began his pro career at age 16 and reached the majors with the Chicago Cubs in 1915, just prior to his 19th birthday. He had cups of coffee with the club the next two seasons and became the primary backup to Bill Killefer starting in 1918, a year when the Cubs won the National League pennant but fell to the Boston Red Sox in the World Series. He took over as the team's regular backstop in 1920, when Killefer went down with an injury, and his average hovered around the .250 mark in his first two seasons as a regular. He then improved dramatically at the plate, hitting .324 in 1922 and .319 with 84 RBIs in 1923. However, he lost his starting job to future Hall of Famer Gabby Hartnett in 1924.

O'Farrell was traded to the St. Louis Cardinals in 1925 and had his best season in 1926, hitting .298 with 68 RBIs and winning the MVP Award as the Cards captured the NL crown. In the World Series that October, he hit .304 and threw out Babe Ruth trying to steal second base for the final out of the Series, giving St. Louis a seven-game victory over the New York Yankees. In 1927, he became player-manager of the club, replacing Rogers Hornsby. However, he was limited to just 61 games that year due to arm injuries, and the team finished second in the NL in his only season at the helm. 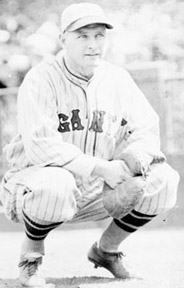 After being fired as skipper, O'Farrell returned to the Cardinals as a player in 1928 but was was traded to the New York Giants early in the season. In four and a half years there, he primarily backed up Shanty Hogan but was behind the plate to catch Carl Hubbell's no-hitter in 1929. He returned to the Cards for one year in 1933 and then spent half a season as player-manager with the Cincinnati Reds in 1934, winning only 30 of 90 games before being fired. He played briefly for the Cubs again in 1934 and ended his big league playing career with a third stint in St. Louis.

After his big league days, O'Farrell returned to the minors, playing two seasons for the Rochester Red Wings. In 1938, at age 41, he was player-manager of the Bloomington Bloomers in the Three-I League.

After his baseball career, O'Farrell was the longtime owner and operator of a bowling alley in the Chicago suburbs.