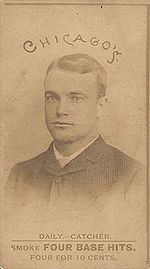 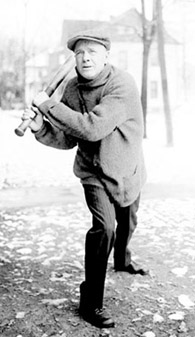 " . . . the greatest high-pressure and mass-conversion Christian evangel that America, or the world, has known." - from his obituary in the New York Times

"I was a good baserunner. . . (b)ut there were better hitters. - Billy Sunday, asked why he didn't put himself on an All-Time team he composed late in life

Bill Sunday, famous as an evangelist, played eight years in the major leagues. He was twice third in the league in stolen bases.

He briefly attended Northwestern University and would coach them in 1888. He was playing semi-pro ball in 1882 when Cap Anson signed him for the Chicago White Stockings. He had a religious conversion at a Salvation Army meeting in 1886.

He worked at a YMCA before becoming an evangelist.

The only other major league player whose last name was Sunday through 2006, Art Sunday, also played in the majors in 1890. They both make the "Days of the Week" team, along with Rick Monday and Skipper Friday.

In the 1930s, Sunday was asked to compose an All-Time lineup, and he chose Hal Chase or Lou Gehrig at first base, Tony Lazzeri at second base, Honus Wagner at shortstop, nobody at third base, Buck Ewing as catcher, and Babe Ruth, Ty Cobb, and Tris Speaker in the outfield with Chuck Klein as utility player.