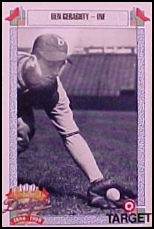 Ben Geraghty was Hank Aaron's manager with the Jacksonville Tars in 1953, when Aaron, Felix Mantilla and Horace Garner helped integrate the South Atlantic League. When the black players stayed at separate lodgings, Geraghty always stopped over to spend time with them. Aaron feels that the Braves discriminated against Geraghty because he wasn't a polished and stylish person even though he was a very good manager. Dave L. Roberts notes that Geraghty also had a drinking problem, something which is confirmed in Pat Jordan's memoir, A False Spring. Roberts and Jordan both write that Geraghty was the most respected manager in the Braves organization, but Jordan adds that his talent for getting young prospects to develop their talent prevented him from getting the job he really wanted, that of manager of the major league team, because he was too valuable to the organization in the minor leagues. Geraghty's Jacksonville team won the SAL pennant in 1953.

As a player, Geraghty is the first man to reach base twice in one game on catcher's interference, doing so as a member of the Brooklyn Dodgers on April 26, 1936, with Earl Grace being the catcher. Only five other players have done so since, for a total of seven times, as Pat Corrales did so twice.

He later was named Minor League Manager of the Year by The Sporting News in 1957 (when he managed the Wichita Braves of the American Association) and 1962 (when he managed Jacksonville in the International League).

He compiled a record of 1317-1021 record over 17 seasons managing in the minor leagues. He was a minor league manager for many years with the Boston Braves-Milwaukee Braves franchise, and also managed in the minors for the Brooklyn Dodgers, Cleveland Indians, and New York Giants. He was managing the Jacksonville Suns at the time of his death.

On June 24, 1946, Geraghty was one of the survivors of a bus crash that killed nine members of the Spokane Indians of the Western International League (including Chris Hartje). Geraghty climbed the hill which the bus had careened down and got help. People said this caused some of his drinking problems and also made him a far more nervous individual. While managing the Jacksonville Suns in June 1963 Geraghty passed away at home of an apparent heart attack just shy of his 51st birthday.

Sources: A Baseball Odyssey by Dave Roberts and Tony Salin, I Had a Hammer by Hank Aaron