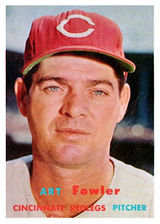 The brother of Jesse Fowler, pitcher Art Fowler made his big league debut with the Cincinnati Redlegs in 1954 at age 31. The brothers' major league debuts were separated by 29 years, easily a record (next were Gus Williams and Harry Williams, and John Paciorek and Jim Paciorek, both at 23 years apart). Fowler's main teammates were Ted Kluszewski, Gus Bell, Johnny Temple and, with the Los Angeles Angels, Albie Pearson.

Fowler later was a major league coach, primarily on the staff of his close friend, manager Billy Martin. In his final season, he was a player-coach with the Angels in 1964 as the oldest player in the American League, and became a member of the Minnesota Twins staff in 1969, when he first worked for Martin.

He had a superb time in the 1970 American Association. At ages 47 and 48, he went 9-5 with 15 saves and a 1.59 ERA as a player-coach for the Denver Bears. He tied Bob Stickels and Garland Shifflett for the league lead in saves. He had the best ERA of any hurler in the league with 50+ IP, beating out guys like Vida Blue, Jerry Reuss and Mike Marshall, who were old enough to be his kids. He also served as interim manager and once started a brawl by chasing an opposing hitter with a bat.