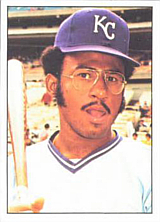 Al Cowens was a big league outfielder who played thirteen seasons. He won a Gold Glove in 1977, his finest season.

Al's bat returned to more normal levels the next two seasons in Kansas City. During the 1979 season, he became involved in an imbroglio with right-hander Ed Farmer, then of the Texas Rangers. In a May 8th game, Farmer struck Cowens in the head with a fastball, fracturing his jaw and breaking several teeth. This pitch was retaliation by Ed for his belief that Al had been stealing signs from catcher Jim Sundberg. Cowens was not the only man to feel the wrath of Farmer: earlier in the game, second baseman Frank White had his wrist fractured by a pitch. Hitting .308/.385/.490 at the time, Al returned around Memorial Day and cooled down to a season line of .295/.348/.409. At the end of the season, he was dealt to the California Angels in the deal that nabbed mighty K.C. first baseman Willie Aikens, a big bat in their 1980 march to the pennant.

Cowens' tenure in Anaheim would be brief, moving to the Detroit Tigers for another first baseman, Jason Thompson, on May 27, 1980. A little under a month later, Al the Tiger ran into Ed Farmer, now of the Chicago White Sox, at Comiskey Park. In the 11th inning of a June 20th game, Cowens led off the top of the 11th with a harmless groundout to Julio Cruz. At least, Farmer thought it would be harmless. With Ed's back turned to the plate, Al decided to get some justice and, instead of the customary trot to first base, bumrushed the mound, pummeling his nemesis with a series of punches before both teams could get to the mound and break it up. American League President Lee MacPhail hit Cowens with a seven-game suspension, while Farmer filed a criminal complaint that led to a warrant being filed for Al in Illinois. The complaint was dropped on September 1st when Farmer's stipulation was met, merely to shake hands and make up at home plate at Tiger Stadium while exchanging lineup cards. On the year, Al's batting line fell to .268/.331/.352 in 142 games.

After his playing career, Cowens was a Royals scout. He died at 50 of a heart attack.