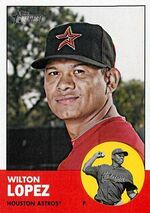 Signed by scout Edgar Rodriguez, López began his professional career in 2004, appearing for four New York Yankees affiliates in A and Rookie ball, but only totaling 12 1/3 IP between his stops. He was then put on the restricted list by New York and spent two years pitching in his native Nicaragua.

During the 2005 Baseball World Cup, Wilton allowed one run in 4 1/3 IP and saved the 1-0 win over the Czech national team, relieving longtime Nicaraguan star Julio Raudez. He helped Nicaragua win Gold in the 2006 Central American Games. In the 2006 Central American and Caribbean Games, he allowed 13 hits and 7 runs in 7 innings, but only two earned runs and struck out 7; he lost his lone decision for Nicaragua. In the 2006 Americas Olympic Qualifier, Lopez allowed five runs in 9 1/3 IP.

He signed with the San Diego Padres next and debuted in their system in 2007, playing for the Fort Wayne Wizards and Lake Elsinore Storm, going 1-0 with a 3.30 ERA in 22 games for the former and 2-1 with a 6.10 ERA in 22 games for the latter. He walked only 3 batters in 50 2/3 IP and was second among Midwest League relievers in fewest walks per 9 innings. In the California League playoffs, he went 0-1 with a 1.93 ERA. He was then added to the Padres' 40-man roster.

He was waived by San Diego after spring training 2009 and was claimed by the Houston Astros. Pitching for the Corpus Christi Hooks, he went 4-5 with a 4.73 ERA but walked only 13 in 110 1/3 IP. He was called up to the big team in late August, and in his debut on August 28th, he gave up a home run to the Diamondbacks' John Hester, who was making his own major league debut as a pinch-hitter. He gave up 6 runs on 8 hits in 4 innings of relief in a 14-7 loss that day. He was 0-2, 8.38 in 8 appearances that first season, but much better things were ahead.

In 2010, Lopez established himself as one of the most reliable performers out of the Astros' bullpen, something which would continue for three seasons. He put up a 2.96 ERA in 68 games in his first full season as a major leaguer, then followed that with a 2.79 ERA in 71 innings in 2011 and a sparkling 2.17 ERA in 64 games in 2012. Those performances occurred with the Astros stuck in the lower reaches of the NL Central, meaning that Wilton went largely under the radar, especially as he was a middle reliever the first two seasons, getting relatively few decisions. In 2012, however, he registered a 6-3 record and 10 saves and walked only 8 batters - against 54 strikeouts - in 66 1/3 innings. He was one of very few bright spots on a team that set a franchise record for losses. The Astros decided to cash in on Lopez's value after the season, trading him to the Colorado Rockies on December 4th in exchange for two young pitchers with plenty of potential, Alex White and Alex Gillingham.

For the 2013 Rockies, he was 3-4 with a 4.06 ERA in 75 games. He tied for 4th in the 2013 NL in games pitched, only four behind leader Brad Ziegler, and still had a 110 ERA+. He fell off in 2014, though, allowing 18 hits and 8 runs in 6 1/3 IP in a sudden collapse after four solid years in the big leagues. For the Colorado Springs Sky Sox, he was better but not near his past level (1-2, 4.57 in 23 G). He pitched for Nicaragua for the first time in eight years and excelled in the 2014 Central American and Caribbean Games. He beat the Bronze Medal-winning Dominican national team in the opener and battled Luis Cintrón and Puerto Rico for six shutout innings before allowing a run in the 7th; J.C. Ramirez took over and Wilton got a no-decision as Nicaragua rallied to win. For the event, he had a 1.29 ERA. His 10 strikeouts tied Gustavo Martínez and Juan De Leon for 3rd in the event, 3 behind leader Norge Luis Ruiz, and he had one of the best ERAs of any pitcher to allow a run.

A free agent, he signed with the Toronto Blue Jays but allowed six hits and four runs in 1 1/3 IP for the 2015 GCL Blue Jays while battling injury. In the 2017 Central American Games, he came up big for Nicaragua. In the opener, he allowed two runs in five to beat El Salvador; Roniel Raudes finished it up. In the Gold Medal Game, he got the nod against Panama and did not disappoint, with one unearned run in five before Raudes again closed the game, as he outdueled fellow former major leaguer Davis Romero.