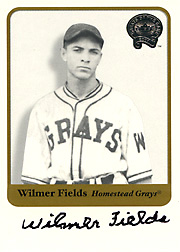 Wilmer Fields was a MVP in two different winter leagues. He was a one-time All-Star in the Negro Leagues who also played summers in the minor leagues, Canada and Mexico.

Wilmer improved to 7-1 for the Grays in 1948 and batted .311. In the first 1948 East-West Game, he relieved Lewis in the 4th and gave up one hit and no runs in three innings, while fanning two before Bob Griffith relieved him. He was 0 for 1 at the plate against Jim LaMarque. In a 3-0 loss by the East, he was their top hurler. During the 1948 Negro World Series, he starred in game four. After driving for almost 24 hours to get to New Orleans, LA, he held the Birmingham Black Barons to one run. Homestead would win the Series, which was the last Negro World Series, with the Negro Leagues starting to die off.

The tall Virginian was 10-4 and batted .330 for the 1948-1949 Indios de Mayagüez. He also hit 11 homers, good for fourth place behind Willard Brown, Bob Thurman and Luke Easter. He was named MVP of the Puerto Rican League for his efforts according to A Biographical History of the Negro Baseball Leagues. Puerto Rico's Winter League lists Luke Easter as MVP that year. In the 1949 Caribbean Series, he scored 8 runs to tie Al Gionfriddo for the Series lead. He went 9 for 21 as the Indios' third baseman, with two doubles, a homer and 6 RBI. He had a better average and slugging percentage than teammates Easter, Carlos Bernier, Artie Wilson, Piper Davis and Alonzo Perry. On the mound, he was 0-1 with 13 hits allowed in 8 1/3 IP.

Fields left Puerto Rico after four winters to sign with Cervecería Caracas of the Venezuelan League for the 1950-1951 Season, batting .389. In the 1951-1952 Season he hit .348 with 8 homers and 45 runs batted ins to win MVP honors. In the 1952 Caribbean Series, he was 9 for 25 with 3 doubles and two homers for Caracas. He tied Spider Jorgensen for the Series lead in homers, led in RBI (8) and tied Sandy Amoros and Spook Jacobs for the most hits. He was nicknamed in Venezuela as "Elefante" (Elephant).

Jack Kent Cooke signed Fields for the Toronto Maple Leafs for 1952, his only season in the US minors. He hit .291/.354/.400 for the AAA club, their second-best average among players with 100+ at-bats. Despite that, he would never get closer to the majors or even get a second look at AAA. In the winter of 1952-1953, he hit .395 in the Dominican League and was 5-2 on the hill. Fields returned to the Manitoba-Dakota League in 1953 and won MVP honors there in both 1954 and 1955. In 1955-1956, he was MVP of the Colombian League. He also would appear in the Panamanian League during his career to round out a trip through most of Latin America's baseball circuits.

Fields played with the Fort Wayne Dairymen in the 1957 National Baseball Congress World Series. He was named MVP, the third former Negro Leaguer to be named NBC World Series MVP with Fort Wayne, following Bill Ricks and Pat Scantlebury. Fields ended his career with the 1958 Mexico City Red Devils. The 35-year-old was 33 for 88 with 2 doubles, 7 homers, 9 walks and 35 RBI in 25 games in an impressive offensive display and had a 4.57 ERA and no decisions on the mound.

After baseball, Fields worked as a counselor for alcoholism in Washington, DC. He was inducted into the Caribbean Baseball Hall of Fame in 2001, the third American ever chosen (following Willard Brown and George Brunet - Willie Mays would be number four several years later. He also wrote a book about his life and served as president of the Negro League Baseball Players Association.