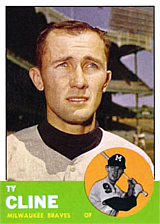 An All-American at Clemson, Ty Cline was a spare outfielder and pinch-hitter in a 12-year career with seven clubs. He was an integral part of the Cincinnati Reds pennant push in 1970.

Through 2019, Ty is the only major leaguer born in Hampton, SC. He attended high school in nearby Charleston and college at Clemson. He was both a pitcher and a position player for the Tigers and the U.S. club in the 1959 Pan American Games. Cline was signed by the Cleveland Indians in 1960, batting .311 for the Mobile Bears with a flawless inning of relief, and was up in the majors by September, hitting .308 in in a 7 game, 26 at bat look. He played 12 games in 1961, then saw fairly regular action in 1962, batting .248 in 118 games as the center fielder. It was not good enough to be kept in the fold, bundled in an offering to the Milwaukee Braves for Joe Adcock.

During 1970, Cline moved to the Cincinnati Reds, batting .270/.387/.413 in 48 regular season games. His most memorable work as a big leaguer came in the postseason. Cline pinch-hit for Reds' starting pitcher Gary Nolan in the top of the 10th inning in Game 1 of the 1970 NLCS. He tripled off Pittsburgh Pirates' starter Dock Ellis. Pete Rose singled him in for what proved to be the winning run. The Reds went on to score two more runs and win, 3-0. Cline also scored the winning run in Game 3 of the series, after walking as a pinch hitter in the eighth inning; the final score was 3-2, completing a three game sweep. Cincinnati lost the 1970 World Series to the Baltimore Orioles in five games. Cline went 1-for-3 in the series; his one hit was a single off Orioles' reliever Moe Drabowsky. In Game 1, batting against Jim Palmer in the sixth inning, Cline reached on a Baltimore chop, the ultimate indignity for a Baltimore club to suffer. But they laughed last and laughed loudest: Palmer spotted the Reds Bernie Carbo trying to score on the play and tipped off catcher Elrod Hendricks. A collision occurred between Ellie and home plate umpire Ken Burkhart and Carbo appeared to evade Ellie's tag (having tagged him with an empty glove with the ball in his bare hand), but Carbo was ruled out.

Cline finished his career in 1971 as a Reds bench bat, retiring to work in a Baskin-Robbins franchise he owned.