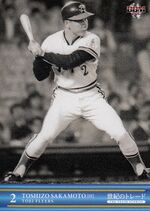 Toshizo Sakamoto was named the top shortstop in the Pacific League for a four-year period.

Sakamoto won seven straight steal titles in college then played for Kawai Musical Instruments in the industrial leagues. [1] He was signed by the Hankyu Braves. As a rookie in 1967, he hit .272/.329/.452 with 7 triples. He tied Fujio Yamaguchi for the PL lead in three-baggers. He hit .192/.222/.346 in the 1967 Japan Series but his five RBI tied Daryl Spencer for the team lead as they fell to the dynastic Yomiuri Giants. He hit the first homer for Hankyu in a Japan Series, innings before Kiyoshi Morimoto hit the 2nd; both were in Game 4. [2]