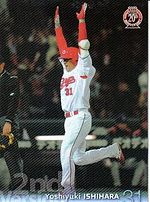 Yoshiyuki Ishihara has been the primary catcher for the Hiroshima Carp for several seasons.

Ishihara injured his hand in spring training in 2005 and was limited to 74 games, hitting .241/.298/.310. He split catching duties with Yoshikazu Kura in 2006, producing at a .221/.276/.296 clip. He hit into four double plays in 6 at-bats with the bases loaded. On September 7, his 27th birthday, he was involved in a very rare play. With the bases loaded of a 5-5 game, he committed catcher's interference to cost Hiroshima the game. Sources differ on whether this was the first time such a play happened in Nippon Pro Baseball history or whether it had been 31 years since the prior walk-off catcher's interference.