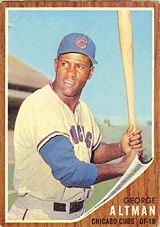 George Altman, who was briefly in the Negro Leagues with the Kansas City Monarchs in 1955, had a successful major league career and a good Japanese baseball career.

He moved on to Japan in 1968, playing as a very popular player for the Tokyo Orions and Lotte Orions through 1974 and for the Hanshin Tigers in 1975. Altogether, he had 205 home runs there. The Vanderbilt University Television News Archive contains an ABC News show wherein Altman describes adjusting to Japan and to Japanese baseball.

The most similar player, based on similarity scores, is Rip Repulski, a near contemporary of Altman who also played most of his years in the National League.

Altman and Fred Valentine were the first players to attend Tennessee State University to reach the major leagues. They were both signed in 1956 and both came up in 1959. The two were teammates at Tennessee State in 1954 and 1955, and Altman came up early in 1959 while Fred came up late in the season. Altman played his entire major league career in the National League while Valentine played his entire career in the American League. Both eventually played in Japan.