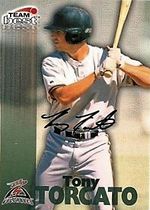 "Tony Torcato, regarded as the best hitting prospect in the Giants' organization, showed why with two hits Sunday, one of them a double laced sharply down the right-field line. Then, he was sent back to Fresno after Kenny Lofton was obtained. . . " - from SF Gate, July 30, 2002 [1]

Tony Torcato hit .298 during four years in the majors and had a long pro career in the majors, minors, foreign ball and independent leagues.

Tony, born in Woodland, CA, was a first round pick in the 1998 Amateur Draft out of Woodland High School, not far from Sacramento, CA. He attended the high school a few years after Dustin Pedroia. He played in the San Francisco Giants organization from 1998-2005. He hit .291 during both of his first two years in the minors, and then in 2000, mostly with the San Jose Giants, he hit .327 with 37 doubles and 19 stolen bases. In 2001, he played for three different teams, in A+, AA and AAA leagues, continuing the trend with an overall .323 batting average, 38 doubles and not many walks or home runs.

At this point, he was still only 25 in 2005. The Giants granted him free agency after the 2005 season. He played some in the Italian Baseball League, then signed with the Chicago White Sox and was sent to the Charlotte Knights for whom he hit .249 in 2006. He was again a free agent after that and signed with the Seattle Mariners but was released before the 2007 regular season started.