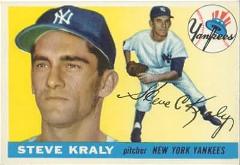 The 1953 Yankees won the World Series, although Kraly did not appear in the Series. One site says that Kraly injured his arm; it should also be noted that he gave up 19 hits and 16 walks in 25 innings, while striking out only 8, but he had gone 19-2 pitching for the Binghamton Triplets earlier that season. He was the same age, 24, as teammate Whitey Ford. He was Mickey Mantle's roommate when they played for Joplin.

On August 23, 2008, Binghamton fans at the game received a Steve Kraly bobblehead doll. A vote taken earlier in the year had established Kraly as the desired subject of the doll to be handed out. He is a member of the Binghamton Baseball Shrine and had a long association with the Binghamton area, including many years of service as the Binghamton Mets' official scorer. He said that Casey Stengel had picked up his contract for the original New York Mets in 1961 but that his wife prevailed on him to retire. One source: Kraly more than B-Mets scorekeeper

He worked for IBM for 30 years.