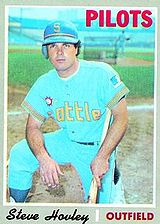 "(Bouton) reports the problems the Pilots' management had with Steve Hovley because of his long hair and penchant for reading Dostoyevsky." - from an ESPN article recalling Hovley in the book Ball Four

Steve Hovley played five seasons in the majors, accumulating over 1,000 at-bats. He had his most at-bats and his highest batting average as a rookie with the Seattle Pilots in 1969, a team made famous by the book Ball Four written by friend and teammate Jim Bouton.

His nickname, according to Bouton in Ball Four, was Orbit or Orbie "because he's supposed to be way out." 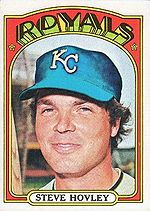 Hovley was born in Ventura, CA and attended Stanford University in 1965 and 1966, just before Bob Boone came there. Both Hovley and Frank Duffy were at Stanford in 1966.

After playing for the San Jose Bees in 1967 and the Seattle Angels in 1968, and being selected by the Pilots from the California Angels in the expansion draft, Steve hit .294 in the first half of the 1969 season for the Rochester Red Wings and the Pilots brought him up to the majors in June. His .277 batting average for the Pilots was the best on the team of anyone with more than 300 at-bats.

He was hitting reasonably well in 1970 (.281 although without any homers) when he was traded in June by the Milwaukee Brewers, following the Pilots' relocation, to the Oakland Athletics in return for Al Downing and Tito Francona. The A's went on to win 89 games but Hovley slumped, and when he started slowly in 1971, he spent time in the minors with the Iowa Oaks, hitting .337.

"To a pitcher, a base hit is the perfect example of negative feedback." - Steve Hovley