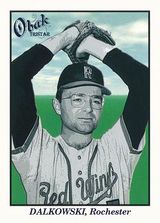 Known for a legendary fastball, Steve Dalkowksi pitched nine seasons in the minors, primarily in the Baltimore Orioles organization. However, he also struggled with wildness (leading three different minor leagues in bases on balls) and only briefly pitched as high as the AAA level.

Signed by Orioles scout Frank McGowan for a $4,000 bonus, Dalkowski made his pro debut in 1957 with the Kingsport Orioles, going 1-8 with a 8.13 ERA and league-leading 129 walks in 62 innings. However, he allowed just 22 hits and also had 121 strikeouts. He had 32 more walks than anyone else, was third in the Appalachian League in whiffs and tied for 4th in losses. His 39 wild pitches were more than double runner-up Bill Parsons' 18. One game, he fanned 24 Bluefield Dodgers but walked 18 and lost, 9-8.

Dalkowski led the California League with 262 walks (in 170 innings; 96 more walks than runner-up Gary Kroll) in 1960 while also striking out a career-high 262. He was 7-15 with an improved 5.14 ERA for the Stockton Ports. He tied John Tupper for the league lead in losses. He paced the Northwest League with 196 base on balls (in 103 innings) the following year, striking out 150 and going 3-12 with a hefty 8.39 ERA for the Tri-City Atoms. He was 46 walks ahead of runner-up Dick Burwell that season.

Dalkowski put together perhaps his finest season for the Elmira Pioneers under manager Earl Weaver in 1962, going 7-10 with a respectable 3.04 ERA; he also recorded 192 strikeouts while walking 114 over 160 innings. He finished 10th in the Eastern League in ERA, first in shutouts (6), was one walk behind leader Dave McNally and tied Sonny Siebert for third in strikeouts (trailing Bob Heffner and McNally).

After baseball, Dalkowski became a migrant farm worker for a time. However, his struggles with alcohol, which he battled while playing ball, became much worse, and he suffered from alcohol-related dementia years later. In 2020, he died in an assisted living facility in his hometown of New Britain, CT where he had been living since 1994, when he became infected by the COVID-19 coronavirus, which complicated his pre-existing health conditions. He was 80.

There is some speculation that he served as inspiration for the character "Nuke LaLoosh" in the 1988 movie Bull Durham; writer and director Ron Shelton played in the Orioles organization a couple of years after Dalkowski was there, and heard plenty of stories about him from former teammates and coaches.