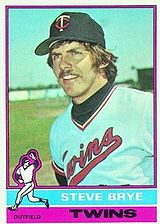 "In 1976 he (Hal McRae) came within one disputed hit of the batting championship, finishing second to Brett. In the ninth inning of the final game, against Minnesota, Brett got an inside-the-park home run on what most people felt was a routine fly ball that Twins left fielder Steve Brye didn't try hard enough to catch. Batting behind Brett, McRae grounded to short and lost the batting title .3333 to .3321. McRae was enraged by what appeared to him to be duplicity on the part of the Twins. Even though Brye insisted that he had misinterpreted defensive instructions and was playing too deep to catch Brett's ball, McRae charged that Brye's less-than-aggressive play was racially motivated because Brett and Brye are white and he is black. There were also intimations that the Twins wanted revenge on McRae for his takeout plays on the base paths. Whatever, McRae soon let the incident slide." - Ron Fimrite, Sports Illustrated, July 19, 1982

Steve Brye was a spare outfielder with the Minnesota Twins for much of the 1970s. In his lone season of semi-regular action, he batted .283 with only 2 home runs in 135 games (114 starts) as the Twins center fielder in 1974. Not much of an on-base or power threat (career line .258/.309/.365), Brye left Minnesota following the aforementioned controversy with seasons as a back up with the Milwaukee Brewers in 1977 and the Pittsburgh Pirates in 1978.