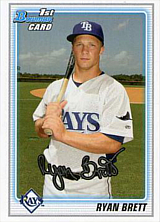 Brett began the 2015 campaign with the Durham Bulls but was called up to the bigs in mid-April. He made his big league debut on April 18th, going 0-for-1 with a walk against the New York Yankees. He made his first start at second base on April 21st in a game against the Boston Red Sox, but had to leave with a shoulder injury in the 3rd inning; he dislocated the shoulder diving pack to first base on a pick-off throw. Brett had collected his first career hit two days earlier, a double off Andrew Miller of the Yankees after entering the game as a defensive substitute.

Brett's big league career was over. He was non-tendered by the Rays after 2015 and missed the entire 2016 season with an elbow injury. The Rays brought him back on a minors pact for 2017, after which he became a minor league free agent. He spent time in the Chicago White Sox system in 2018, then moved to the independent American Association, first with the Kansas City T-Bones and later with the Cleburne Railroaders.