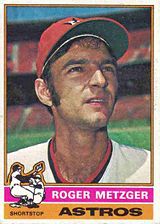 Metzger was born in Fredericksburg, TX, north of San Antonio, TX. He attended high school in San Antonio and went to college in Austin, TX, where he majored in mathematics. The Chicago Cubs made him their first round draft pick in the 1969 amateur draft; he was the second shortstop picked in the draft, after Alan Bannister.

The Cubs assigned Roger to the Tacoma Cubs in 1969 and 1970, and brought him up for one game in 1970. After that season, he was traded to the Houston Astros for Hector Torres, who had been the Astros' regular shortstop during the 1968 season.

Roger played for Houston from 1971 through part of the 1978 season. He rarely played any position other than shortstop during that period, and was often a workhorse, typically appearing in 140+ games in a season. In 1972 his 23 stolen bases were good for ninth in the league.

In the middle of the 1978 season, the San Francisco Giants bought him. The rest of the Giants' infield was composed of big stars - Willie McCovey, Bill Madlock and Darrell Evans, while he shared playing time at shortstop with Johnnie LeMaster; the team won 89 games that year. He stayed with the Giants through 1980.

In 1980, Roger attempted to make a comeback after losing four fingers in an accident with a chainsaw during the offseason. However, he only hit .074 and was released by the Giants in August.

After baseball, he taught mathematics at Brenham High School and as of 2005 was the job procurement officer at the Brenham State School. Source: Alumni Spotlight. He was inducted in the Texas Baseball Hall of Fame in 1996.