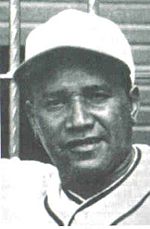 Pancho Coimbre was a top Puerto Rican League star of the 1940s. He also played baseball in Venezuela, Colombia, Canada, the United States of America, the Dominican Republic and Mexico.

When the Puerto Rican League was formed in 1938, Coimbre led the league in doubles with 14. He came to the US in 1940 and hit .320 as a starting outfielder for the New York Cubans, hitting second in the order. He batted .401 in the winter of 1940-1941, 5th in the league, just ahead of Buck Leonard, Lenny Pearson and Josh Gibson.

Moving to cleanup in 1941, Pancho batted .353 for the New York Cubans, 4th in the Negro National League behind Bill Hoskins, Henry Spearman and Monte Irvin and right ahead of Roy Campanella. In the 1941 East-West Game, the 22-year-old played right field and hit second for the East. He went 0 for 5 and made an error but scored twice in a 8-3 win. That winter, he hit .372, 4th-best in Puerto Rico behind Gibson, Willard Brown and Perucho Cepeda while his 17 doubles tied for second, one behind Leonard. He did not strike out all winter long.

Pancho did not play in the USA in 1942. In 1942-1943, he led the Puerto Rican League with a .342 average and shared MVP honors with Luis Olmo. He again did not strike out, having gone two straight winter ball seasons without a whiff, presumably a record. Back in the Negro Leagues in 1943, he batted .440 for the New York Cubans, 4th in the NNL behind Tetelo Vargas, Sammy Bankhead and Josh Gibson. He hit .376 that winter in Puerto Rico.

Roberto Clemente said that Coimbre was a better player than himself.

Coimbre scouted for the Pittsburgh Pirates from his retirement in 1951 until 1976. He also coached for the Ecuadorian national team that won the 1966 South American Championship among other work in Ecuadorian baseball. His son Francisco Coimbre Jr. played in the minors. Coimbre Sr. died tragically in a fire at his house in 1989.

Pancho was a candidate in the 2006 Special Committee on the Negro Leagues Election but did not make the final round of ballots. He was voted into the inaugural Latin American Baseball Hall of Fame class of 2010, though.