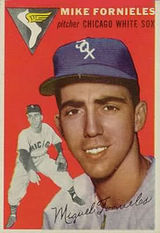 In 1951 Mike Fornieles started out his professional baseball pitching career in the class C Longhorn League with the Big Spring Broncs. He chalked up 17 wins against 6 losses in 208 innings pitched for a nifty 2.86 ERA. This was the start of a spectacular up-and-down baseball career.

Fornieles was with the Havana Cubans of the Florida International League in 1952, winding up with a 14-12 record in 213 innings and a 2.66 ERA. This performance caught the eyes of the Washington Senators of the American League and they signed Fornieles in September for the remainder of the season. Put on the mound for his first big league start on September 2, 1952, against the Philadelphia Athletics, the 20-year-old side-armer gave up only one hit, a single to Joe Astroth in the 2nd inning. Only one man reached base after the 3rd inning. Fornieles finished out the year with the Senators, going 2-2, pitching 26 innings with a 1.37 ERA.

The record shows that on December 10th, Washington traded Fornieles to the Chicago White Sox for veteran pitcher Chuck Stobbs. The Sox used Fornieles mainly as a spot starter and long reliever. His four-year tour with them brought 15 wins and 13 losses.

On May 12, 1956 he was traded to the Baltimore Orioles, along with Connie Johnson, George Kell and Bob Nieman for Jim Wilson and Dave Philley. Fornieles did not fare well with the Orioles, going 2-6 during his stay.

Things got better for Fornieles due to a trade to the Boston Red Sox for Billy Goodman in June of 1957. The Red Sox used him mainly in late relief roles and he became the Boston team's main closer in 1959. He led the 1960 American League with 14 saves and 70 appearances. In 1961, he attained a career-high 15 saves.

Fornieles stayed with Boston until mid-June of 1963 and at that time he was purchased by the Minnesota Twins. He went 1-1 with a 4.76 ERA in 11 games and the Twins released him in July. This was to be the last of his Major League career. Fornieles pitched 12 seasons in the Major Leagues, playing for five different teams. He wound up with 63 wins and 64 losses. He appeared in 1,156 innings of 432 games with a lifetime ERA of 3.96.

After his career he became a car salesman in Florida. Fornieles was residing in St. Petersburg, FL at the time of his death in 1998. He was 66 years old.