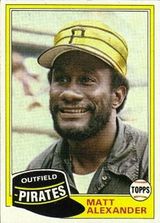 “No one’s ever given me the time to show what I can do... What people don’t understand is that it’s never a lack of opportunity, just time. I could hit .260 if I played every day up here. Maybe .270, .280 with a good hitting instructor. But a lot of the time, when a player’s called up, it’s those first few weeks that count. If you don’t get in the lineup, you become an extra man the rest of your career.” - Matt Alexander, to Phil Musick of the Pittsburgh Post-Gazette, March 16, 1979

Matt Alexander was a highly-touted rookie player for the Chicago Cubs in 1973. Heralded as a speedy leadoff hitter who could play infield or outfield, Alexander never lived up to his potential as an everyday player. He is, however, arguably the greatest pinch runner of all time. He was used in that capacity 271 times during his career, stealing 91 bases and scoring 89 runs, all records.

Born in Shreveport, LA, he attended Bethune High School, which he led to a state championship in 1965 over Vida Blue's high school. He played collegiately at nearby Grambling State University. He was twice on the all-Conference team during his stay there, and was eventually named to the Southwestern Athletic Conference Hall of Fame. He was selected by the Cubs in the 2nd round of the 1968 amateur draft following his junior year. Playing infield while coming up through the Cubs' system, he started with the Caldwell Cubs of the Pioneer League in 1968, where he hit .261 in 35 games and was the league's all-star second baseman. He led the 1969 Midwest League third basemen in putouts, despite playing a month and a half in the Texas League. Alexander missed the 1970 and 1971 seasons due to military service in the Navy. When he came back, he started playing outfield for the Midland Cubs of the Texas League in 1972. He stole 38 bases in 41 attempts that season while hitting .270.

Alexander was promoted to Triple A in 1973, hitting a solid .309 in 106 games with the Wichita Aeros of the American Association and earning his first call-up to the major leagues in August. He played 12 games for the Cubs, 3 in the outfield and the rest as a pinch runner. He spent most of 1974 with the Cubs, getting into 45 games but hitting only .204. He played 19 games at third base, including 13 starts while fellow rookie Bill Madlock was hurt, but was himself bothered by a pulled muscle in his leg which affected his playing time. He also spent 30 games back at Wichita that year, hitting .275. Out of options, he was outrighted to Wichita at the end of the season. He started the 1975 season there, going 8 for 32 in 7 games and then was acquired in a trade by the three-time defending champion Oakland Athletics on April 28, immediately called up to the American League.

He came into his own as a pinch-running specialist for the A's in 1975. He took over the roster spot previously used by Herb Washington, a sprinter masquerading as a baseball player. He was now a teammate of rookie outfielder Don Hopkins, whose own job was 90% pinch running, in accordance with team owner Charles Finley's infatuation with the running game. Of the three, Alexander was by far the best baseball player, who could be useful in a number of ways besides pinch running with his ability to play a number of positions in both the infield and outfield and his capacity to switch-hit. He went only 1 for 10 at the plate, but got into 63 games, scoring 16 runs and stealing 17 bases (while being caught 10 times). The A's won their division that year, but Alexander was not used in the ALCS, which Oakland lost in a three-game sweep to the Boston Red Sox. His manager in 1976 was Chuck Tanner, who had everyone on the team running wild - the A's stole an amazing 341 bases that season, with Alexander contributing 20 against 7 caught stealing. He got 30 at bats that year, but only managed one hit, the lack of regular work clearly affecting his batting stroke. In 1977, he played a career-high 90 games, and went 10 for 42 at the plate (.238). He scored 24 runs and stole 26 bases in 40 attempts, sharing pinch running duties with Larry Lintz. With the A's racked by the defection of all their stars through free agency or trades for prospects, there was little anticipation of playing many of the close, high-leverage games in which a specialist pinch runner is most useful. Matt was released at the end of spring training in 1978 and it looked like the end of the road. He started attending barber college back in Shreveport.

He promptly caught a tremendous career break when Chuck Tanner brought him to the Pittsburgh Pirates to work as a pinch runner for the pennant race in 1978. He played seven games without going to bat or playing the field, stole 4 bases and scored 2 runs. He was offered a contract for 1979 and spent some time with the Double A Buffalo Bisons, hitting .313 in 32 games. He was brought back to Pittsburgh as the pennant race against the Montreal Expos heated up. Not only did he score 16 runs and go 13 for 14 as a base stealer, but he actually showed some ability with the bat as well, going 7 for 13 with a triple as the Pirates edged the Expos on the season's last day. He was part of the Pirates' 1979 World Series winning team, used once each in the NLCS, scoring a run against the Reds in his only appearance, and in the World Series, where he was caught stealing by the Baltimore Orioles in Game 2. He spent all of 1980 with the Pirates, scoring 13 runs and stealing 10 bases, while going 1 for 3 with a double in his only plate appearances. He returned for one more year in 1981, after playing 27 games with the AAA Portland Beavers of the Pacific Coast League, where he hit .324. He spent the last month of the year with the Pirates, going 4 for 11 at the plate, and scoring 5 runs and stealing 3 bases in 15 games. He was not finished with baseball, as he signed with the Mexico City Tigers of the Mexican League after being cut by the Pirates at the end of spring training in 1982. In 1983, he set the league record for stolen bases with 73, even though he was already 36. He continued playing in Mexico for a few more seasons after that. Alexander also played for the Winter Haven Super Sox of the Senior Professional Baseball Association in 1989-90. He played in only one game, as a pinch runner of course, and scored a run.

Matt Alexander's career is truly unique. In a study done by Brandon Isleib of Baseball Prospectus, Alexander was found to have the most pinch running appearances of any player between 1957 and 2007, with 271, 73 more than runner-up Otis Nixon. In the history of Major League Baseball, only seven non-pitchers have played at least 100 games and have more games played in their career then they have plate appearances; Alexander leads this group with 374 games played while accumulating only 195 plate appearances.

He primarily wore number 36 during his career.