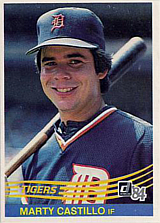 “He can play first, third and catch, and that makes him very valuable... Guys like Castillo will always help good teams. Maybe he wouldn’t be able to help a bad team that couldn’t use him right, but good teams always have a player or two like Marty.” - Sparky Anderson

Marty Castillo hit one of the most improbable home runs in World Series history, a two-run shot against Tim Lollar of the San Diego Padres in Game 3 of the 1984 Fall Classic.

It's not that Castillo did not have power; he hit 8 homers in 352 career at-bats in the bigs. But it was a highly unlikely turn of events that he was even in the starting lineup for that game. Nominally the third-string catcher of the Detroit Tigers, he only had 155 at bats in 1984, his second full season (not counting 7 games over 1981 and 1982), hitting .234 with 4 homers and 17 RBI. He started 28 games behind the plate and 14 games at third base, behind Howard Johnson and Tom Brookens on the hot corner depth chart, while Darrell Evans and Barbaro Garbey also saw playing time there. During the postseason, manager Sparky Anderson played a hunch and gave Castillo a few starts at third, benching Brookens and Johnson (Evans also saw some action). Castillo responded by going 2 for 8 with a pair of RBI in the ALCS, including driving in the only run of Game 3 by beating out a potential double play grounder against the Kansas City Royals. He then went 3-for-9 with that key homer which broke a scoreless tie with the two teams even at one game apiece in the World Series. The Tigers never looked back after his clutch hit, winning that game, 5-2, and the next two to dispose of the Padres easily.

Castillo's brother, Art, was an outfielder in the Minnesota Twins chain from 1973-1975.