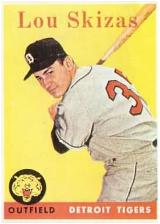 Outfielder-third baseman Lou Skizas played four seasons in the majors, and had a notable debut in 1956 when he hit .314 with 11 home runs in 89 games while playing mainly for the Kansas City Athletics after starting the season with the New York Yankees. He came close to having the highest slugging percentage on the Athletics that year.

The April 15, 1957 issue of Sports Illustrated referred to him as "superstitious Lou Skizas, the Chicago Strong Boy". The reference to superstition may have been to a habit of rubbing a medal in his back pocket between pitches, and he apparently had other rituals. In 1957 he did something pretty unusual: He hit 18 home runs but struck out only 15 times.

Starting off his professional career in the Yankees' minor league system, he had been with the Norfolk Tars in 1951, along with Moose Skowron and Bill Virdon, before missing two seasons because of military service at the time of the Korean War. The book The Pride of Havana says he also played in Cuba. The book Willie Mays: A Biography says that Skizas played on a service team (apparently in 1952) against Mays' service team.

Skizas was a member of the Chicago White Sox team which won the pennant in 1959, albeit briefly as he was traded away on May 1st and never played in the major leagues again. He played for the Seattle Rainiers of the Pacific Coast League in 1959 and 1960 and hung up his glove after the 1962 season.