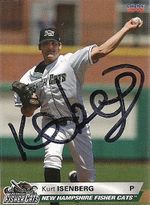 Pitcher Kurt Isenberg played in the minor leagues from 2003 to 2008. He was the Toronto Blue Jays' 4th-round draft pick in the 2003 amateur draft, taken a few slots ahead of future All-Stars Jonathan Papelbon and Michael Bourn. He was signed by scout John Ceprini.

He was 7-2 with a 1.63 ERA in 13 starts with the Auburn Doubledays in his first professional season and after a down year in 2004, he was 12-8 with a 3.54 mark in 26 starts for the Dunedin Blue Jays in 2005. He never again reached such success. He was taken by the Portland Beavers in the Triple-A edition of the 2007 Rule V Draft, but he never played for the club.

This biographical article is missing the person's: full name

This page is in need of some additional content. Please help the Bullpen by expanding it, or learn how to contribute.
Retrieved from "https://www.baseball-reference.com/bpv/index.php?title=Kurt_Isenberg&oldid=1061768"
Categories: