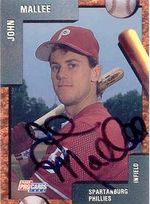 Mallee was hitting coach for the Beloit Snappers in 1996-1997 and the 1998 Stockton Ports. He was with Beloit in 1999 and the Huntsville Stars in 2000, then the Ottawa Lynx in 2001 when moving to the Florida Marlins chain. From 2002 until June 2010, he was minor league hitting coordinator for the Marlins. He was then promoted to the major league staff on June 23, 2010, replacing Jim Presley as hitting coach. Presley had been fired along with manager Fredi Gonzalez and bench coach Carlos Tosca. Less than a year later, on June 8, 2011, he was in turn fired with the Fish performing poorly at the dish, and replaced by Eduardo Perez.

In 2013, he was named hitting coach of the Houston Astros under new manager Bo Porter. He served in that position for two years, then moved to the Chicago Cubs in 2015, staying until the end of the 2017 season. In 2018, he became hitting coach of the Philadelphia Phillies but was replaced by Charlie Manuel on August 13, 2019. In 2020, he joined the Los Angeles Angels as assistant hitting coach.