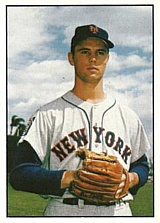 Jim Bethke was the youngest player in the National League in 1965 when he pitched 25 games for the New York Mets at age 18. He was 26 years younger than teammate, and fellow pitcher, Warren Spahn, who was 44. Through 2019, the only other major leaguers with a last name starting with Beth are Bill Bethea, who played in 1964, and Christian Bethancourt, who played in the 2010s. Also through 2019, the only other big leaguer born in Falls City, NE has been Charlie Abbey.

Bethke was signed as a free agent in 1964 and played in the minors in 1964 for the Cocoa Rookie League Mets and for the Auburn Mets. In 1965 he pitched six games for the Buffalo Bisons but otherwise was at the major league level. He continued to pitch in the minors through 1971, spending 1968 to 1970 with the Memphis Blues.