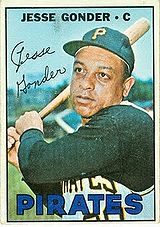 Jesse Gonder originally was signed by the Cincinnati Redlegs in 1955, although he never played for them. He attended the same high school - McClymonds High School in Oakland, CA - as two of the team's stars in the late 1950s, however, Frank Robinson and Vada Pinson.

He was a decent-hitting catcher who couldn't find a regular job because of his modest defensive ability. He came up for cups of coffee with the New York Yankees in 1960 and 1961, but they already had Yogi Berra and Elston Howard. With the Cincinnati Reds, he started hitting well in 1963, and was traded to the New York Mets and ended up hitting .304 for the season.

1964 was the season with the most at-bats, as he hit .270 in 341 at-bats, on a Mets team that hit .246. He also led the National League with 21 passed balls that year, sealing his reputation as a poor defender. He continued to hit well in 1965 (his .238 average for the Mets was above their team average of .221) but was traded to the Milwaukee Braves where he hit only .151. He closed out his career with the Pittsburgh Pirates.

After his playing days he became a bus driver.