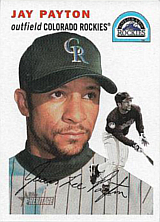 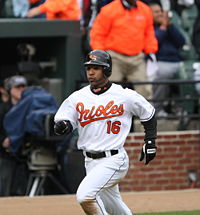 Jay Payton played 11 seasons in the major leagues with 6 teams. He hit over .300 a couple of times, and in 2003 hit 28 home runs for the Colorado Rockies.

Payton, Nomar Garciaparra and Jason Varitek were all selected out of Georgia Institute of Technology in the first round of the 1994 amateur draft.

He was an oddity on the 2006 Oakland Athletics, a team that was noted for low batting averages and copious walks. Payton hit .296, the highest average on the team among the regulars, but had only 22 walks, by far the lowest total among the regulars. He was also odd in that the Athletics were terrible at hitting doubles, finishing 13th in the league in doubles, while Payton was good at hitting doubles, hitting 32 to lead the team.

2006 was his second postseason appearance, after being in the 2000 postseason and 2000 World Series with the New York Mets.

Because Payton's skills were a bit different than many of his contemporaries, the most similar players according to the similarity scores method are from eras of long ago - Danny Litwhiler, Pete Ward, and Hoot Evers. The most similar contemporary players are Jeffrey Hammonds and Todd Hollandsworth.

Payton was an announcer for the College World Series Super Regional round on ESPN in 2012. He works for ESPNU on college baseball.