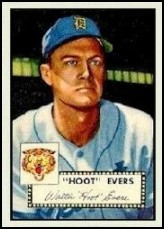 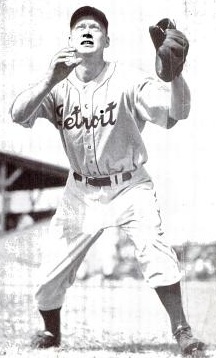 Outfielder Hoot Evers played a dozen years in the minors and was a two-time All-Star. Tall and rangy, Evers was a bonafide star from 1947-50, hitting well over .300 for three seasons and just missing a fourth.

After attending the University of Illinois, where he was a teammate of Joe Astroth, Evers was signed by the Detroit Tigers in 1941. He made his pro debut that summer and reached the majors that September, appearing in one game. After hitting .322 for the Beaumont Exporters in 1942, he missed the next three seasons while serving in the military during World War II.

After the war, Evers rejoined the Tigers in 1946 but missed much of the season due to a broken ankle. The next summer, he hit .296 with 10 home runs. In 1948, he hit .314 with 103 RBIs while striking out only 31 times, and was named an All-Star. After his average dipped to .303 in 1949, he bounced back and had his finest season in 1950. That year, he hit .323 with 35 doubles, 21 home runs, and 103 RBIs, and led the American League with 11 triples. He was again an All-Star, hit for the cycle on September 7th, and at one point had a 19-game hitting streak. On June 23rd of that summer, eleven home runs were hit in a game between the Tigers and New York Yankees, with the homers driving in all 20 runs of the game; Evers had two that day, including one inside the park.

Evers' average fell nearly 100 points in 1951 to just .224, and he was traded to the Boston Red Sox early the next season. The Red Sox hoped he would replace Ted Williams, who was serving in the Korean War, but he broke his finger and hit .264 with 14 home runs. Following two years in Boston, he was acquired by the New York Giants. After another stint with Detroit, he ended his career playing with the Baltimore Orioles and Cleveland Indians.

After his playing career ended, Evers worked in the Indians organization for several years and was a member of the team's coaching staff in 1970. The next season, he joined the Tigers front office, and he later worked as a scout for the club.