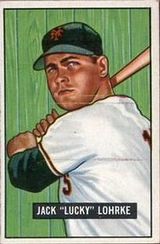 He graduated from South Gate High School and broke into organized baseball in 1942 at age 18 with the Twin Falls Cowboys in the Pioneer League. He played for Twin Falls and the San Diego Padres in 1942 and was then drafted into the U.S. Army.

He saw combat in Europe, fought in the Battle of the Bulge, the worst battle in U.S. History, from December 16, 1944 to January 25, 1945 and survived two battle experiences in which comrades on either side of him were killed. En route from Camp Kilmer in New Jersey to California where he was to receive his discharge, he was bumped from the military transport by a colonel. The plane went down with no survivors. The plane from which Lohrke got bumped left New Jersey and landed in Kansas City, KS without incident. After refueling in Kansas City, the Los Angeles-bound plane crashed seconds after takeoff, and all 20 on board, most of them soldiers, perished (WWW).

Discharged in 1946, he returned to San Diego but was optioned to the Spokane Indians of the Western International League. He played for Spokane until June 24, 1946, when, traveling at dusk in a drizzling rain, the team bus driver en route from Spokane, WA to Bremerton, WA veered the bus on a narrow road in the Cascade mountains to avoid an oncoming auto and the bus broke through the cable-guard railing and caught fire as it hurtled 350 feet down the steep, rocky mountainside some 60 miles east of Seattle, WA. Eight players were instantly killed and a ninth died a few days later. Lohrke learned when the bus stopped to feed the players in Ellensburg, WA that he had just been called up to San Diego and had gotten off the bus to hitchhike back to Spokane to catch a plane to San Diego when he was notified. One survivor was Ben Geraghty. Chris Hartje was among those who were killed. The crash occurred 15 minutes after Lohrke left the vehicle. His trip to San Diego was complicated by the sad task of having to accompany the young widows of two of his fallen friends to their respective homes. A little shell-shocked, he made it to San Diego and finished the 1946 season there.

Lohrke gained the nickname "Lucky" for reasons that should now be obvious, and went on to become the Giants regular third baseman in 1947 and a utility man thereafter. (JK)

Lohrke was 23 years old when he broke into the big leagues on April 18, 1947, with the New York Giants. On August 31st that year, despite a 10–4 loss to the first-place Brooklyn Dodgers, Lohrke homered to set a season record for home runs by a club. His homer was number 183 that season, topping the 182 hit by the 1936 New York Yankees. The Giants ended the season with 221 round trippers. He played in the 1951 World Series for the Giants but was hitless in two appearances. He was farmed out to the Jersey City Giants of the International League (IL) in 1949, and on December 13, 1951, he was traded by the Giants to the Philadelphia Phillies for minor leaguer Jake Schmitt. He played for the Phillies in 1952 and 1953), his final major league game coming on June 10, 1953 at age 29. On January 13, 1954, the Pittsburgh Pirates traded workhorse Murry Dickson to the Phils for Andy Hansen and Lohrke, but he never played for the Bucs.

He retired for good after working 20 years for Lockheed Aircraft. His son, Kurt Lohrke, played in the minors (1971-1973). Jack had black hair and brown eyes, his ancestry was German and his principal hobbies were hunting, fishing and golf. He celebrated his 82nd birthday in February 2006 at his residence in San Jose, CA with his wife Mary Josephine Sunseri, whom he had married on December 10, 1948.

SABR member Bill Hickman learned that Lohrke was still alive in San Jose and supplied John Pastier with his phone number, who recalls his interaction with the former player thus:

At Bill's suggestion I called Lohrke, and was ready with a well-filled fountain pen and fresh stack of note paper.

The phone was answered after just a couple of rings (an auspicious start). It was answered by a lady whose voice sounded age-appropriate to someone who might be Lohrke's wife or sister. I asked if Jack Lohrke was there, and she answered yes (even more auspicious).

Then Jack Lohrke picked up the phone. I confirmed that it was him, announced myself, told him I was a member of SABR, and asked if he had heard of us. Not so auspiciously, he said no (we are, after all baseball's best-kept secret), so I quickly told him what SABR was. Then I said that his name had recently come up in our discussions. I mentioned that there was some confusion in SABR about the details of an event in his life, and that I'd like to ask him about the bus crash.

What follows is a complete and unedited transcript of the interview: