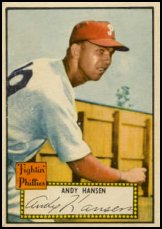 Andy Hansen signed as an amateur free agent with the New York Giants before the 1943 season. The 6' 3" 18-year-old righthander spent his first season with the class D Bristol Twins of the Appalachian League, appearing in 16 games and building a 12-3 record while pitching 115 innings. He was with the Jersey City Giants of the International League in 1944, going 8-4 with a 1.89 ERA and also appeared with the Giants, going 3-3 with a 6.49 ERA in his first look at major league hitters.

Andy was with Jersey City again in 1945, getting into five contests and going 1-3 and again spent time with the major league Giants, winning 4 and losing 3 with a 4.66 ERA before he was called into the United States Army, where he served the rest of 1945 and 1946, during the final days of World War II.

After the 1950 season, he was with the Baltimore Orioles of the International League in 1951 when he was called up by the Phillies. On the final weekend of the season that year he beat the Brooklyn Dodgers, 4-3, handing Brooklyn a critical loss and helping his former Giants team move into a first-place tie.

Andy finished out his pro baseball career in 1954 with the Hollywood Stars of the Pacific Coast League, appearing in three games with no decisions, ending his minor league tour with a 22-11 record and a 1.89 ERA. After baseball, Hansen became a postal worker for 30 years and died February 2, 2002, at age 77 in Lake Worth, FL.