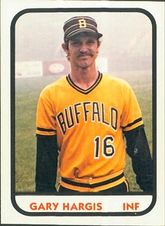 "You keep thinking 'Just let me get in one game so my name can get into the book.' When you do, it's just like the movie. Your eyes light up, you never want the night to end." - Gary Hargis, about his major league experience

Gary Hargis was a second-round pick in the 1974 amateur draft and made it to the majors in 1979 as a pinch-runner for the Pittsburgh Pirates, who went on to win the 1979 World Series. His appearance came in the 13th inning of the season's penultimate game, against the Chicago Cubs on September 29th, with the pennant still undecided. He ran for Tim Foli with two outs and the Pirates down, 7-6, then went to second on a single by Dave Parker but was stranded there when Willie Stargell struck out to end the game. However, the Pirates won the next day to clinch the pennant, going on to win the Championship.

In the minor leagues, he played mostly shortstop and second base, with a few games at third base and in the outfield as well, in a career that lasted 8 seasons, with 5 spent at AAA. His best year was 1978, when he hit .283 with 21 doubles and 10 homers for the Columbus Clippers. He had pretty good speed, stealing 20 bases twice and 19 once while rarely getting caught.